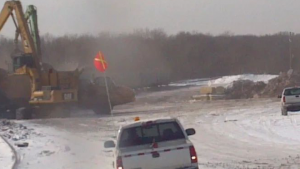 Holcim’s managers watch as Lordstown Landfill operators dig out-of-state waste from railcars. The sloping ground, covered with waste, drains to a local stream only a few hundred feet away.

Due to waste, uncontrolled dust, oil and heat, fires are not uncommon at the Lordstown Landfill. Fortunately, no one was hurt during this blaze. But the fire residue, burnt wastes and wastewater drained directly toward the local stream. 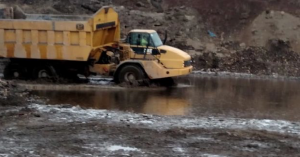 A huge Holcim truck drives through backed-up water on the Lordstown Landfill. Waste spillage, oil leaks and tire crud from the landfill all contaminate the ponded water which eventually drains to the local stream or groundwater.

CLEVELAND, OHIO, UNITED STATES, May 3, 2022 /EINPresswire.com/ — Holcim US (formerly Lafarge) is a subsidiary of Holcim, the Switzerland-based cement giant, and is the parent company of the Lordstown Landfill. The controversial demolition waste-only landfill is located in Trumbull County, northeast Ohio and has received several hundred violations and multiple consent orders from the Ohio EPA since 2016.

Apparently, there are not too many regulations that Holcim has not violated.

According to Ohio EPA records, in February 2022, the Lordstown Landfill discharged contaminated stormwater 1,500% over its Ohio EPA permit limit for Total Suspended Solids (TSS) and also exceeded its copper limit.

The April 2022 Ohio EPA Report shows Holcim’s landfill discharged contaminated water 30 times the TSS limit, 200% over the copper limit, 28% over the zinc limit and exceeded the pH (acidity) limit. The landfill also exceeded its permit limit for TSS at another discharge point in March.

According to a report from the U.S. Department of the Interior, Fish and Wildlife Service, “Zinc has its primary effect on zinc-dependent enzymes which regulate RNA and DNA. The pancreas and bone are primary targets in birds and mammals; the gill epithelium is a primary target site in fish. Major sources of anthropogenic zinc in the environment include electroplaters, smelting and ore processors, mine drainage, domestic and industrial sewage, combustion of solid wastes…and erosion of agricultural soils.”

High TSS in stormwater or drinking water can affect both the environmental and human health, respectively. According to StormwaterX, “Suspended solids reduce visibility and absorb light, which can increase stream temperatures and reduce photosynthesis. Impeding aquatic plant photosynthesis reduces the amount of food, habitat, and dissolved oxygen available for other species. Fine particles may also clog and abrade fish and insect gills and tissue and interfere with egg and larval development.”

StormwaterX also states “Pollutants such as pesticides and PCBs adhere to the surfaces of TSS and can be transported into aquatic environments in this fashion. High TSS levels are often associated with higher levels of disease-causing microorganisms such as viruses, parasites, and some bacteria…”.

Elevated copper causes problems in streams as well. According to the USEPA, “Copper is an essential nutrient at low concentrations, but is toxic to aquatic organisms at higher concentrations. In addition to acute effects such as mortality, chronic exposure to copper can lead to adverse effects on survival, growth, reproduction as well as alterations of brain function, enzyme activity, blood chemistry, and metabolism.”

Holcim’s landfill also exceeded the pH limit of 9.0 in multiple sampling events in 2022 which can directly affect the quality of stream life. According to Robertson-Bryant Consultants, “The pH of water affects the normal physiological functions of aquatic organisms, including the exchange of ions with the water and respiration. Such important physiological processes operate normally in most aquatic biota under a relatively wide pH range (e.g., 6-9 pH units).”

Holcim’s Lordstown Landfill disposes of approximately 5,000 railcars of demolition waste a year. 100% of the railed wastes originate from East Coast states such as New York, New Jersey, Connecticut and Massachusetts. The landfill has disposed of more than 100,000 railcars of out-of-state waste since opening in 2004.

Over a million dollars in waste-related fees are paid annually to the Trumbull County Health Department, which licenses the landfill, the Village of Lordstown and the State of Ohio.

Demolition wastes may also contain a wide range of hazardous substances if the East Coast waste handlers “cocktail” them into much cheaper-to-dispose demolition waste for shipment to Ohio.

Holcim’s discharge sampling point is only about 100 feet from where the landfill unloads the trains; the land drains directly to a tributary to Duck Creek which is used downstream for recreational fishing.

In the October 5, 2022 Ohio EPA’s Notices of Violation to the Lordstown Landfill, one of the many violations noted, “The material and waste on the outside of the tracks were piled as high as three feet.”

Precipitation leaches contaminants from the waste and then drains to the pond. Large pools of leachate were observed and photographed by the Ohio EPA during the inspection.

The Notices of Violations also stated “LCR has failed to comply with Part IV, C of the NPDES permit by allowing spilled waste materials to remain between rail tracks upwards of a week, and when cleanup activities do occur, they are ineffective in removing all accumulated waste from the rail unloading area…”

It is unclear what steps Holcim is taking to correct these long term problems or if the Ohio EPA plans to study Duck Creek for environmental impact from the landfill.

According to Ohio EPA’s public records, Holcim’s Lordstown Landfill is still operating without a 2022 landfill license. The 2022 license application was due to the health department last September; apparently, Holcim’s on-going compliance problems have upheld the license approval/denial process. 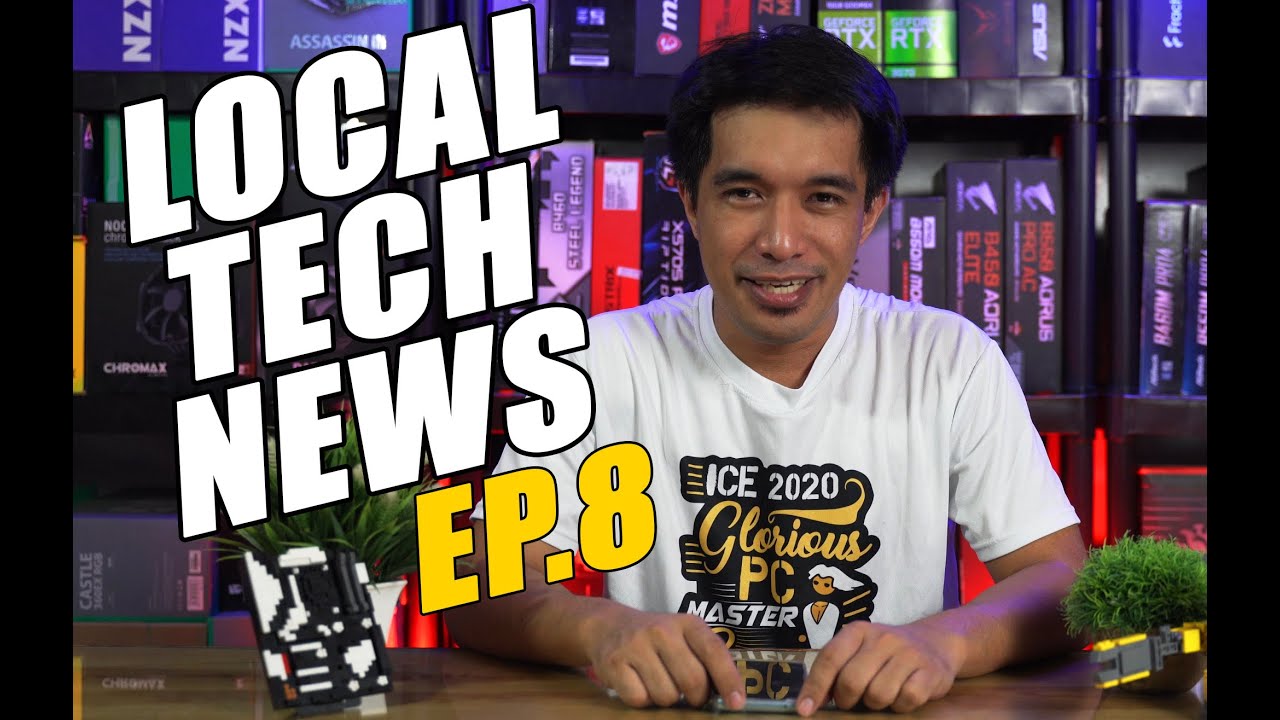 U.S. politicians react to news of Iranian attack against U.S. bases in Iraq

Leaders from both political parties in the United States said on Tuesday that they are awaiting more information on a missile attack …
Originally published at https://www.youtube.com/watch?v=a9-tpuYLCA4

WSJ’s Jerry Seib, who reported from Cairo in the 1980s, says the violence in Egypt underscores U.S. impotence in Egypt and that …
Originally published at https://www.youtube.com/watch?v=ZtBqTS-uSV4